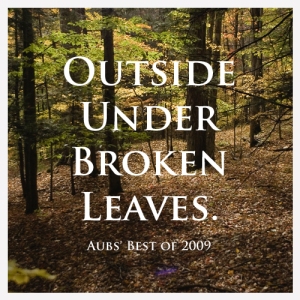 Every year has its own soundtrack; music and lyrics evoking memories from the many moments that made up the past days and weeks and months. And as in years past, I’ve compiled the songs that meant so much to me this year.

2009, for me, was a year in contrasts. So many unbelievable highs shared time with  some painful, seemingly unfathomable lows. And this year’s soundtrack reflects that; you’ll hear the songs I put on while dancing around the house excited about the night ahead and the ones that I found myself weeping quietly to while on a plane. But that’s life; the flip sides of the same coin. Sorrow and joy. It’s what makes living exhilarating and real and a constant struggle and a constant delight.

And so this year, I’ve chosen not to just list the songs and provide background on the band, but give you a glimpse into why these songs found a place on this list, a place in my heart, a place in the personal time capsule of my own 2009. Most – but not all – were released this year; I thought it was more important to provide an accurate soundtrack of what I was listening to instead of being constrained by the release date. I wanted to paint an authentic portrait of the last (almost) 365 days so I’ve shared the memories I had associated with each of the songs. I hope you enjoy it as much as I have to put it together.

1. Rome – Phoenix
Mid-September. The Warfield Theatre, San Francisco. Standing next to my favorite person, listening to my favorite band.  The stage lights dimmed, and Thomas Mars asks the crowd to clap along, then suddenly, quietly, he sings: “I stand outside under broken leaves.” The crowd joins in. “I know I can’t do without, the future’s drowned away. I never loved you, if I loved you, wouldn’t say that I’m sorry, oh no. I stand outside under broken leaves.”

2. Fables – The Dodos
July. Happy. This song is cheery and poppy and never fails to put a smile on my face. At 2:46, I develop a crush on it; by 3:33, I’m firmly in lust. “Remember when you were my accomplice, now we forget why we started this.”

3. Rich Doors – New Villager
January. Quiet month, so this was a good distraction. Driving to work in the morning, I listen to Sirius XMU; heard about this San Francisco-based band (by way of Brooklyn) and after just one listen, went and downloaded it immediately. I have a good feeling about these guys.

4. Bad Romance – Lady Gaga
December. Ok, I admit it. This is the one I dance around my room to. A LOT. I wasn’t originally a fan – I mean, the video alone is weird, and I have to (embarrassingly) admit that I first heard it in its entirety on Gossip Girl (SHUT UP, I KNOW) and her weird, sinister-sounding  jibberish of “Ra Ra, aah aah aah, Ro  ma, Ro ma ma,  Ga Ga, Ooh la la” is plain just odd. But the chorus…damn that chorus. It’s grammatically incorrect – “You and me can write a bad romance “ – and certainly not mind-blowingly deep prose, but it’s catchy as all hell. This is an empowering, roll down the windows, crank up the stereo sort of song.

5. Airplanes – Local Natives
July. I initially fell in love with this song after hearing the percussion and the use of the violin over the guitars. Listened to it incessantly that month, then it kind of fell off of my radar, until last week I was driving in a car just a few blocks, sitting at a stop light, and listened to the lyrics again. “I love it all, so much I call, I want you back, back, back. You back.” Yep, I love it all.

6. Sweet Disposition – The Temper Trap
October. It’s only fitting that this song is also on the “500 Days of Summer” soundtrack since it was the movie that affected me most this year. “A moment, a love. A dream, aloud. A kiss. A cry. Our rights. Our wrongs. “

7. About Today (Live) – The National
October. November. December. On a plane, yet again. Going somewhere. Back east? Heading home to San Francisco? I listened to this song so often this latter half of the year that the memories are muddled. Of any song on the list, this one gets under my skin, makes my soul ache, in its simple words. “You just walked away. And I just watched you. What could I say? How close am I to losing you?”

8. Fog – Mason Proper
March. Another song that I listened to earlier in the year but rediscovered recently. Somehow music just comes into your life when you need it most, when it fits best. “I tried to warn you, but you were out of your head, I tried to hold you back. I’ll meet you in the fog, again. And between you and I, we can, make some sense of this.” Reminds me that the story isn’t over yet.

9. Blood – The Middle East
November. Reminiscent of Midlake a bit, the lyrics sound like they should be from an Antlers song, but these Australians have created something that rings like a lullaby to me.

10. Shelter – The xx
October. Unexpected night, unexpected events. This song playing in the wee hours of the morning, in a huge four-poster bed at a Victorian mansion bed & breakfast we had recently discovered. This album is the soundtrack of seduction. “I find shelter, in this way. Undercover, hideaway.”

11. Kettering – The Antlers
October. Was a hot month in San Francisco, but I never felt warm.  And this song fit. This Brooklyn-based band’s morose album silently wove my way into my heart. The lyrics are morbid, but the song itself gets under your skin.

12. Slow Life – Grizzly Bear
October. If I didn’t love Alexandra Patsavas – the music supervisor who worked on this album – I’d be reticent to admit that this comes from the Twilight: New Moon soundtrack. But that woman has phenomenal taste in music, and Victoria Legrand’s ethereal voice is haunting on this track. It’s like a breath of fresh air from the chaos that is life.  “Even though you’re the only one I see, if you ask I’ll cut you free.”

13. Fun Stuff – Frightened Rabbit
October. This is about learning to be alone. Moving on.  Letting go while feeling a sense of loss. “The Fun Stuff is much less fun without you.”

14. A Brief History of Love – The Big Pink
September. I love when songs are appropriately named, and this one is no exception. Love is fleeting. But worth it. “Let’s get lost and feel warm tonight, hit by another and the feeling is right. It’s all over tonight. As you leave me. It’s up to you to lend me your heart but you won’t let it go. And as you leave me, you’re in my heart I feel true love, and it won’t let go. It’s up to you mend my heart, please don’t let go.”

15. Left and Leaving – The Weakerthans
December. I almost called this mix “Left and Leaving”, because sometimes it’s hard to tell who’s left and who’s leaving. This year I experienced a lot of both.  Putting faith in coming back home. “I wait in 4/4 time, count yellow highway lines, that you’re relying on to lead you home.”

16. Heartbeats – Jose Gonzalez
December. This cover of The Knife’s song is a last-minute entry into the mix, but it didn’t feel complete until it was added. It’s ethereal and sweet and sad and honest. “One night to be confused. One night to speed up truth. We had a promise made. Four hands, and then away. Both under influence. We had divine sense to know what to say.”

17. Let Down – Radiohead
June. It has been a year of transit. Comings and goings. Seemed fitting to end this mix, this year, with a song that reflects this. “Transport, motorways and tramlines, starting and then stopping, taking off and landing. The emptiest of feelings.”

I can’t imagine the last twelve months without these songs accompanying me on all of my journeys. May they also go with you on yours.

*As with last year, the artwork was created by Ryan McManus, whose musical taste also rocks. And as always, please support these and other artists by buying their albums on iTunes, Amazon, or eMusic.

7 thoughts on “Outside Under Broken Leaves: Aubs’ Best of 2009 Mix”