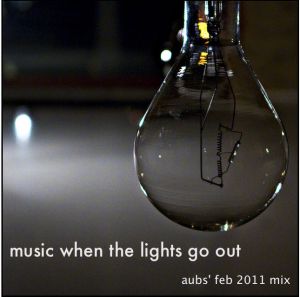 Just three days into March and I’m finally posting my February Mix. It’s been worse, people, it’s been worse. What with travel and a new job and Pilates and, oh, I don’t know, catching up on Fringe, you can forgive me that it’s a bit late. (Though the Type-A part of me hates hates hates this, esp. when I go back into my archives and looks for my February Mix, only to find it in March. SO UNCOOL, AUBREY.) But regardless, lots going on, I rarely post here, am supposed to be redesigning it, tralala, ok I’ll shut up now. On to the music.

2011 started off a bit slow music-wise, but oh, did it catch up. Thus far I’ve only seen one show, but it was Scott Hutchison of Frightened Rabbit opening for Josh Ritter, and not only is he phenomenally amazing live, but there was whiskey. So there was that. But with SXSW fast approaching (one week and counting!) I’m excited to see many of the bands on my February Mix, none moreso than New Zealand’s The Naked and Famous, which are this year’s MGMT, only minus that last crappy album and with a bit o’ Tegan & Sara (minus the angsty lesbianism) thrown in. They’re GOOD people, and top my list of who to see live at SXSW. Alexander Ebert finally – FINALLY! – released his new album, so the Internets can stop trying to record off of SiriusXMU and bootleg it galore. It’s a solid solo album, though “Truth” remains my favorite song. Twilight Singers have a new one, which is also pretty damned good, but the most airplay on my iTunes is from Middle Brother, which is the ‘supergroup’ project from the lead singers of Dawes, Deertick and Delta Spirit that’s seroiusly knocking my socks off. I’m not at McDonalds but damn, I’m LOVIN’ IT!

So take a listen. Enjoy. And as always, if you like the music, buy – with actual cash money, yo – their albums and support these artists. Happy FebruMarch!

1. If You Wanna: The Vaccines
2. Electrify: MUTEMATH
3. Lines Are in the Sand: Mona
4. I Hope This Gets to You: Daylight
5. Weekend: Smith Westerns
6. In The Twilight: Alexander
7. Broken Open: Cold War Kids
8. Moves: The New Pornographers
9. Punching in a Dream: The Naked and Famous
10. Killin the Vibe: Ducktails
11. Older Brother: Pepper Rabbit
12. Helplessness Blues: Fleet Foxes
13. Blood and Guts: Middle Brother
14. I Still Remember: Bloc Party
15. Music When the Lights Go Out: The Libertines
16. Do What You Will: Papercuts
17. The Unfazed: Delorean
18. Gunshots: The Twilight Singers
19. Good Night: The Rural Alberta Advantage

One thought on “Music When The Lights Go Out: Aubs’ February 2011 Mix”