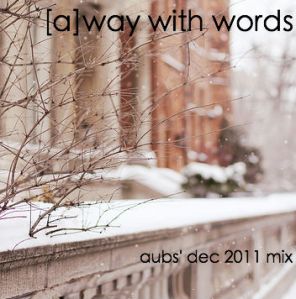 I did it. It was a lofty goal, and many months I thought there was no way I was going to find the time to post another mix. “Who’s going to miss this?” I’d think. “Maybe I’ll just wait for next month.” But instead, I somehow made it a priority to get all twelve of these suckers out, albeit usually a few weeks late. Because it’s important to me. This discovery of new music, but moreover, the sharing of this music with others.

I don’t know how many of you are downloading these or listening to them on Spotify or RDIO. But I do know that throughout the last twelve months, I’ve received so many emails, @replies, texts, and even met people in person who have enjoyed these mixes. And that makes it all worth it. I hope you’ve found a new favorite song, learned about a new artist, and have gone to a live show you wouldn’t have otherwise. I know I have.

I’m not sure what next year will bring. Without my commute (hurrah!) and the stylings of Sirius XMU (you hear that, Jake Fogelnest?) finding new music is a lot more difficult than it was when I was held captive in my car for nearly 2.5 hours a day. Spotify and RDIO have helped with this, and I’m finding myself having to ask for recommendations and seek out new music from friends. So a monthly mix for 2012? We’ll see. I’m setting other resolutions and doing other things that will require a lot of diligence and time. I’ll definitely still continue to share music, but not sure it will be on a strictly monthly basis as it was this past year. But we’ll see. I continue to surprise myself.

So this month, December 2011. It’s always the hardest one, esp. since I still need to curate my “Best of 2011 Mix” (I have one more day, for those of you who are calendar-obsessed.) It was particularly difficult as I just didn’t listen to a ton of new music. As such, you’ll see some of my life-long favorites on here, such as “Father and Son” by Cat Stevens and “Bookends” by Simon and Garfunkel. I’ve randomly heard both of these songs while out & about this blustery month, and made a mental note to listen to them more often. Which I’ve done. Then there’s some ‘new to me’ songs (such as “The Killer” by The Twilight Singers and “What Jail is Like” (shoutout to Sean Garrett & Charlie Love for their recos) by The Afghan Whigs. But yes, there’s still some new ditties; “Little Talks” by Of Monsters and Men is poppily delectable by this Icelandic group, and there are TWO new songs by The National because I just couldn’t decide if I liked “I Need My Girl” more or less than “Rylan”. (You get ‘em both.) The rest, I’ll let you discover for yourself.

Thank you for listening. Thank you for sharing your music with me, and as always, please support these amazing artists by purchasing their music (on MP3 AND Vinyl!) and attending their shows.

Happy 2011, everyone. It’s been quite a year. Thanks for being here with me.

*Spotify playlist, which is missing three awesome songs (Born to Lose, I Need My Girl and Rylan.)